in the reigns of Elizabeth I & James I

Ravish’d By Magic is set in a time when Monarchs believed themselves ordained by God, and us such were God’s chosen representative on earth and a power above all other.  The colossus King Henry VIII had been a despot who brooked no opposition, executed rivals and even his own wives, accusing one of witchcraft and allowing rumours to circulate that she had six fingers on each hand and a monstrous aborted child through copulating with her own brother.

Although the Reformation brought the demise of Mystery plays and Rogationtide processions, and an end to belief in sacred places and holy wells there was continued ritual and superstition, and widespread belief in signs and portents.  The Puritan denial of Purgatory meant that the souls of the dead were believed to go straight to Heaven or Hell, yet in Shakepeare’s Hamlet and Macbeth, there is place for the popular belief that ghosts appear between midnight and cock crow. Witchcraft, astrology and divination flourished in England during the 16th and 17th centuries and all manner of strange charms were employed to keep away evil spirits and to bring good fortune. Wise Women and Cunning Men had the power to wreak havoc in a chaotic world of poverty and disease, and even Kings were not protected from their curses and ugly rituals.

Our programme encompasses themes of superstition and necromancy, the astonishing life of the polymath Dr Dee, and belief in witchcraft and the horrors of Hell.  Entitled “Ravish’d by Magic” it includes sonnets, speeches and extracts from Macbeth and The Tempest, as well as anecdotes from the time of Elizabeth and James and of course, lots of truly ravishing music.

The Prince & the Pauper

The sonorous yet uncommon pairing of two gut-strung instruments of opposite pedigrees: professional fiddlers vs leisured aristocrats.

Thy Word is a Lantern

from Tudor to Georgian England,

﻿The genre of 3 equal parts to a bass

was considered the supreme compositional

Pachelbel's Canon was a unique solution, but there were many others, equally delightful. 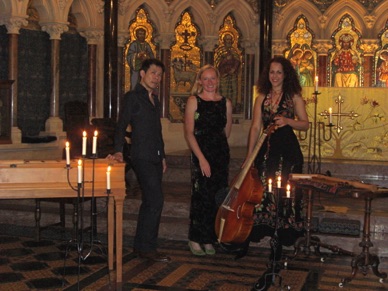 The Life & Times of Queen Elizabeth I

with songs & instrumental dances by